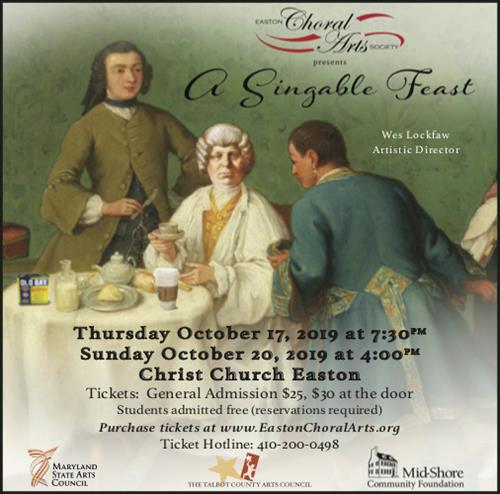 This fall, Easton Choral Arts Society will present “A Singable Feast”. From appetizers and ale to cakes and coffee, this concert will leave patrons hungry, with songs about food from the classics, Broadway and jazz. Featured will be the hilarious PDQ Bach work, The Seasonings, written by Peter Schickele.

The Seasonings, is a satirical rendition of Haydn’s oratorio The Seasons. The four seasons of Haydn's work are now replaced by seasonings such as tarragon, leeks, sesame and curry and incorporated into a story about the search for the perfect ingredients for a recipe. The result is a tasty musical  smorgasbord!

The concert’s repertoire also includes Jacques Offenbach's, “The Recipe” which may entice patrons to bake a cake, while “Coffee in a Cardboard Cup”, by the composers of Cabaret, will tickle your funny bone. Also included are  works by John Rutter, and Sigmund Romberg.

Promote positive change in the community while helping your business grow.

Explore benefits and resources available to Chamber members only.

We are here to support local businesses during Covid-19. Click here for important information and to learn more about how we are helping businesses continue to thrive during this time.